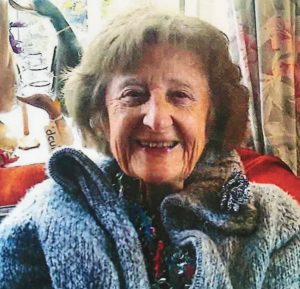 Phyllis was born in Cairo, Egypt and lived in Alexandria before attending the American University in Cairo. Psychology was her future direction so she moved to University College, London for psychology before taking her Masters in Psychology at the Maudsley in London. At that time, it was possible to have joint professional training as an educational psychologist and a clinical psychologist which stood her in good stead throughout her professional career. She worked in the English Midlands before transferring to a post as Principal Psychologist across several boroughs in south London.

I was very fortunate to meet her at an ARICD meeting in 1982 as she retired from work and we started our Griffiths journey together. I learnt much about Ruth Griffiths as Phyllis had been trained by her. Our first course followed soon after with regular Griffiths training courses in Brighton for many years. We went on several sprees to Groningen, Holland for various meetings to support aspects we were putting into our training courses. We never had a student on the course to whom she could not speak in their own language. My work changed at the end of the 1990’s but she carried on with courses in Kent and at Imperial College, London as well as writing the book Testing Children to document for a wider group what we had been teaching. Testing Children is still on sale through hogrefe.com, both as a hard-back book and as an e-book.

Phyllis developed her own perspectives on aspects of psychology with posters of Levels of Function, Elements of Psychological Growth, Patterning of Growth, and the Information Processing system in order to encourage our trainees to think more widely about their testing of children She remained an active member of the British Psychology Society until recently with letters asking for interdivision events in child psychology and comments on the neglect of the individual ‘as a whole’. I can still picture her at the Australian ISM in 2009, standing on a box in her red shoes to speak to us. Not surprisingly she got tremendous applause. Her last act that I know of regarding the Griffiths Scales was to critique the draft of the modern version of the Avenues of Learning diagram in Manual 1 Griffiths III. Her input is on the published version. She served on the ARICD executive regularly during the 1980s and 90s, and possibly earlier too. Laurence Burns, President, asked her to be the inaugural Chair of the Training Committee. Rising to Vice President, she had to take the acting President role twice during her time in office.

Many of us will have mementos from her of her poetry, painting and pottery with which she filled her days as well as reviving her Greek, learning Brazilian from scratch, wintering in Arles, France and keeping up with the times as well as her two granddaughters, Emma and Lizzy who feature in some of her poems. She leaves a partner Euan, a daughter and family plus a newly born great granddaughter.

We use cookies on our website to give you the most relevant experience by remembering your preferences and repeat visits. By clicking “Accept All”, you consent to the use of ALL the cookies. However, you may visit "Cookie Settings" to provide a controlled consent.
Cookie SettingsAccept All
Manage consent

This website uses cookies to improve your experience while you navigate through the website. Out of these, the cookies that are categorized as necessary are stored on your browser as they are essential for the working of basic functionalities of the website. We also use third-party cookies that help us analyze and understand how you use this website. These cookies will be stored in your browser only with your consent. You also have the option to opt-out of these cookies. But opting out of some of these cookies may affect your browsing experience.
Necessary Always Enabled
Necessary cookies are absolutely essential for the website to function properly. These cookies ensure basic functionalities and security features of the website, anonymously.
Analytics
Analytical cookies are used to understand how visitors interact with the website. These cookies help provide information on metrics the number of visitors, bounce rate, traffic source, etc.
SAVE & ACCEPT
Powered by