Rosemary studied at the University of Cork and thereafter worked in the Brothers of Charity services in Cork becoming Head of the Psychology Department in 1980 until her retirement in 2006, during which time she built the services into a large and vibrant department.

She developed a range of services including setting up classes for children with Autism, commencing psychological services to primary schools and was instrumental in establishing Child Development Clinics across Cork and Kerry.  Rosemary was one of the founding members of the Psychological Society of Ireland (PSI).

Rosemary had a way of making everyone feel valued and she allowed people to develop without pressure, always working to make people feel the best about themselves. No problem was too great to overcome with Rosemary’s professional input. 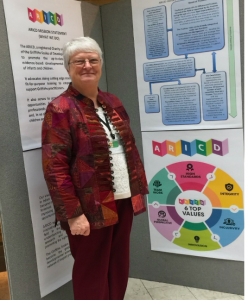 Rosemary used the Griffiths Scales of Mental Development regularly in her clinical practice and became the main Irish tutor of the scales for many years. Having campaigned to have Irish children included in the GMDS-ER revision, she spent many weekends travelling across Ireland to assess children to ensure the new standardisation of the Griffiths scales was representative of both UK and Irish children. Subsequently she became an active member of the Association for Research in Infant and Child Development (ARICD) Executive Committee serving two terms as Honorary Secretary. She was pivotal in developing the Governance polices required after ARICD became a CIO charity.

Rosemary also contributed to the research and development of Griffiths III the most recent edition of the Griffiths published in 2016. Just prior to her death she completed a case study using Griffiths III for the forthcoming book Griffiths III in Clinical Practice.

In retirement Rosemary, moved to live in Union Hall, West Cork where she fully embraced village life. She also travelled all over the world including teaching the Griffiths Scales in China and India and visits to Japan, New Zealand and South Africa.

Rosemary led a life full of achievement, she was a remarkable lady and is fondly remembered.  We will miss her experience, wisdom and good humour.

We use cookies on our website to give you the most relevant experience by remembering your preferences and repeat visits. By clicking “Accept All”, you consent to the use of ALL the cookies. However, you may visit "Cookie Settings" to provide a controlled consent.
Cookie SettingsAccept All
Manage consent

This website uses cookies to improve your experience while you navigate through the website. Out of these, the cookies that are categorized as necessary are stored on your browser as they are essential for the working of basic functionalities of the website. We also use third-party cookies that help us analyze and understand how you use this website. These cookies will be stored in your browser only with your consent. You also have the option to opt-out of these cookies. But opting out of some of these cookies may affect your browsing experience.
Necessary Always Enabled
Necessary cookies are absolutely essential for the website to function properly. These cookies ensure basic functionalities and security features of the website, anonymously.
Analytics
Analytical cookies are used to understand how visitors interact with the website. These cookies help provide information on metrics the number of visitors, bounce rate, traffic source, etc.
SAVE & ACCEPT
Powered by